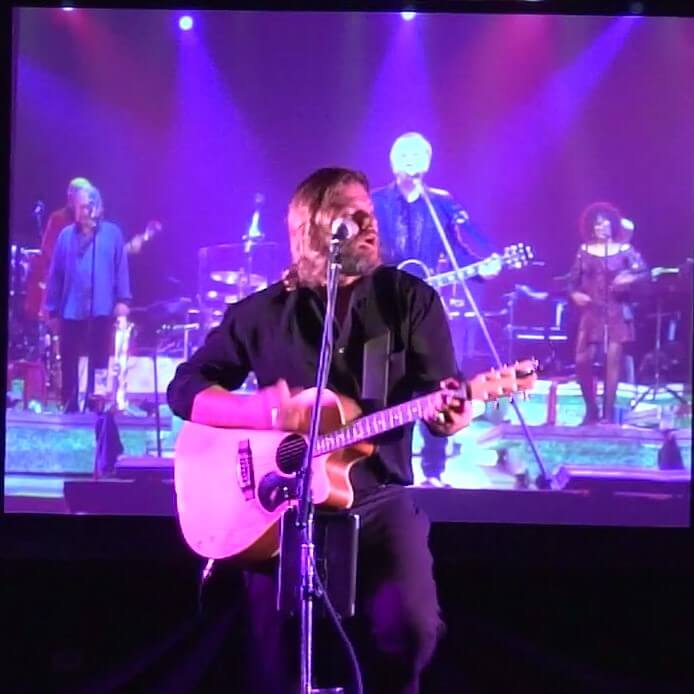 This April, the Neil Diamond The Man The Music Show will enter into it’s 4th year under exclusive representation with All Things Entertainment.  With over 50 bookings, a string of sold out shows on the calendar and more confirmations every day, we thought it was high time we brought you the story behind this high successful ” mini show”……..

Singer/songwriter Craig Stewart is known throughout the music industry as “The Storyteller” – and he brings his formidable skills to telling the tale of the man, the legend – Neil Diamond. Neil Diamond – The Man, The Music tells the story of the man himself, tracing his journey from humble beginnings as the son of a shopkeeper through to becoming a genuine global superstar. The show features numerous interviews and behind-the-scenes stories of how some of Neil’s most loved songs actually came to be – all presented in Craig’s distinctly intimate style.

The show is extremely popular, and for good reason: this one-man-show uses three projectors and programmed lighting to combine approximately 700 different images with close to 30 of Diamond’s songs, including hits such as “Cracklin’ Rosie”, “I Am I Said” & “Sweet Caroline”.

The show traces the path of Neil’s career, but also celebrates his music – particularly the Hot August Night album. As Craig says: “I know what people would probably expect from a Neil Diamond show, but I can guarantee that’s not what they’ll receive! People continually say to me they’ve never seen anything like it, but they loved it – as I do.”

Craig jokes that he didn’t choose to do a tribute to Neil Diamond, but that Neil “chose him”. “Well, he doesn’t know that, but he did! It was a complete fluke. A local venue wanted to do a Hot August Night show, I agreed to try and help them out, and the rest is history. The show has evolved over the past eight years to incorporate a lot of visual elements and technology, which has resulted in it being a far more immersive experience than its humble beginnings.” The use of imagery is a unique selling point of the show, complementing the songs and performance to perfection.

“I wanted an artistic element to weave its way through the music that would help lend meaning to the lyrics”, says Craig. “I’m absolutely thrilled with how it turned out. It is definitely the final wow factor that leaves everyone wanting more.”

Why choose Neil Diamond for a tribute show in the first place, though? Craig believes that Diamond is very much an inter-generational artist. “Neil himself said that he wanted to write music that helps people feel good about themselves.  He achieved that goal – people love to sing along to his songs.”

But Diamond is also a craftsman that creates songs with lots of musical detail that keep things interesting… And makes for shareable moments. “The audience is always full of people my age who grew up listening to his music, my parent’s age who were purchasing his music back in the ’70s and a younger generation who have identified with songs that will remain timeless.”

Working with All Things Entertainment gives Craig the space he needs to focus on creativity and creating is own songs whilst travelling the country presenting the Neil Diamond The Man The Music Shows. “Having chased my own shows for the great majority of my career, I fully appreciate the amount of work Nancy (Nancy Hillary from All Things Entertainment) and her team needs to put in to get me the number of bookings that she has so far! She also keeps me on my toes, making sure that I’m up to speed with producing marketing and promotional material. At the same time, All Things Entertainment go out of their way to promote the shows across all mediums – radio, print and social media. Nancy is a tremendous asset to my business, a great person to work with and someone who I now count as a very close friend.”

Catch a show near you

To keep up to date where the Neil Diamond The Man The Music show is performing in between all of Craig’s other solo performances, please click through to this Facebook page and give it a like and follow. https://www.facebook.com/neildiamondthemanthemusic

Some of the things people have said about the show:

“an absolute knock out”

“Craig’s show stands out as one of the best”

All Things Entertainment and 2022

I had big plans for last year. All Things Entertainment and the big post-covid recovery extravaganza! But the universe had ...